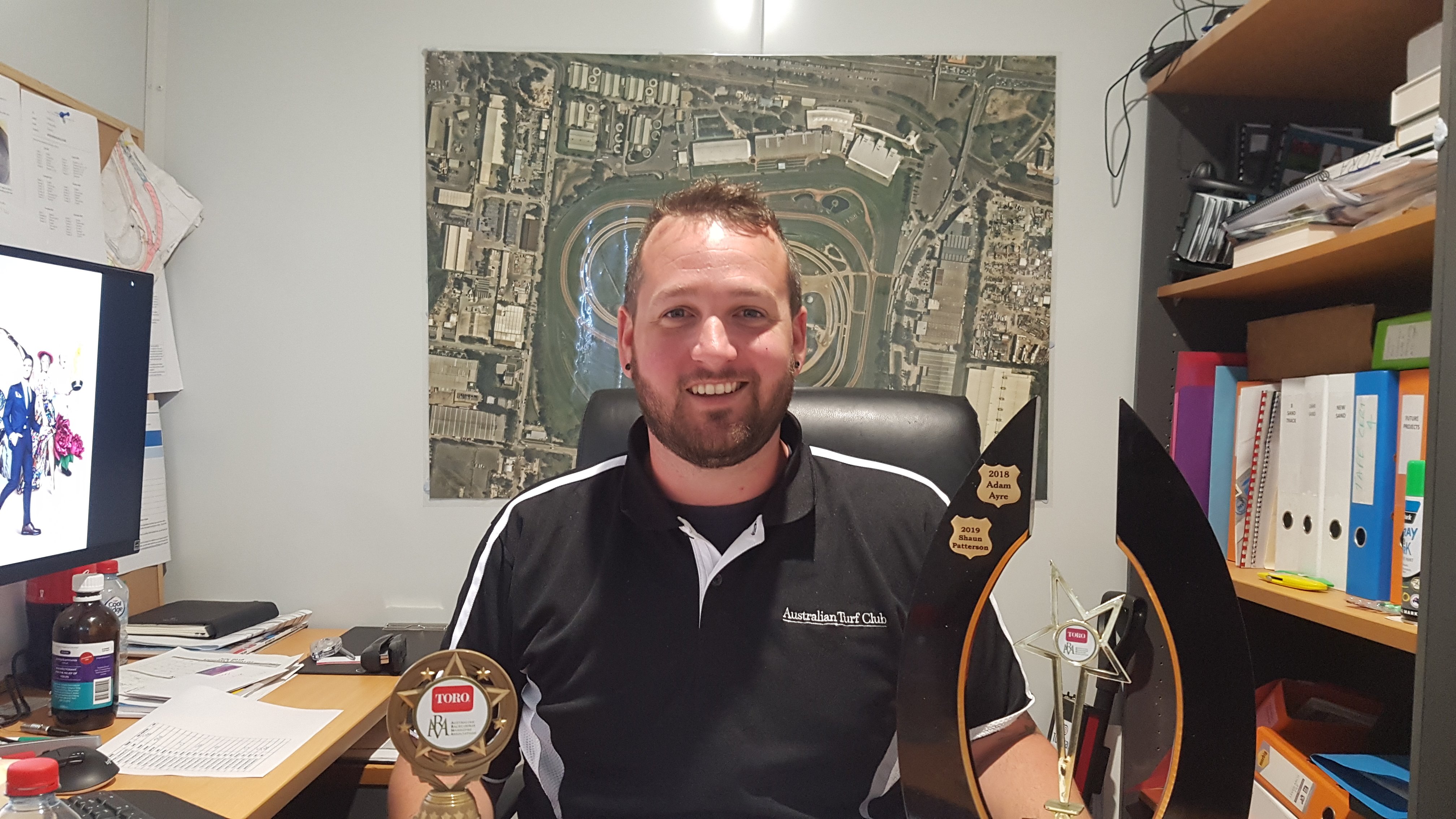 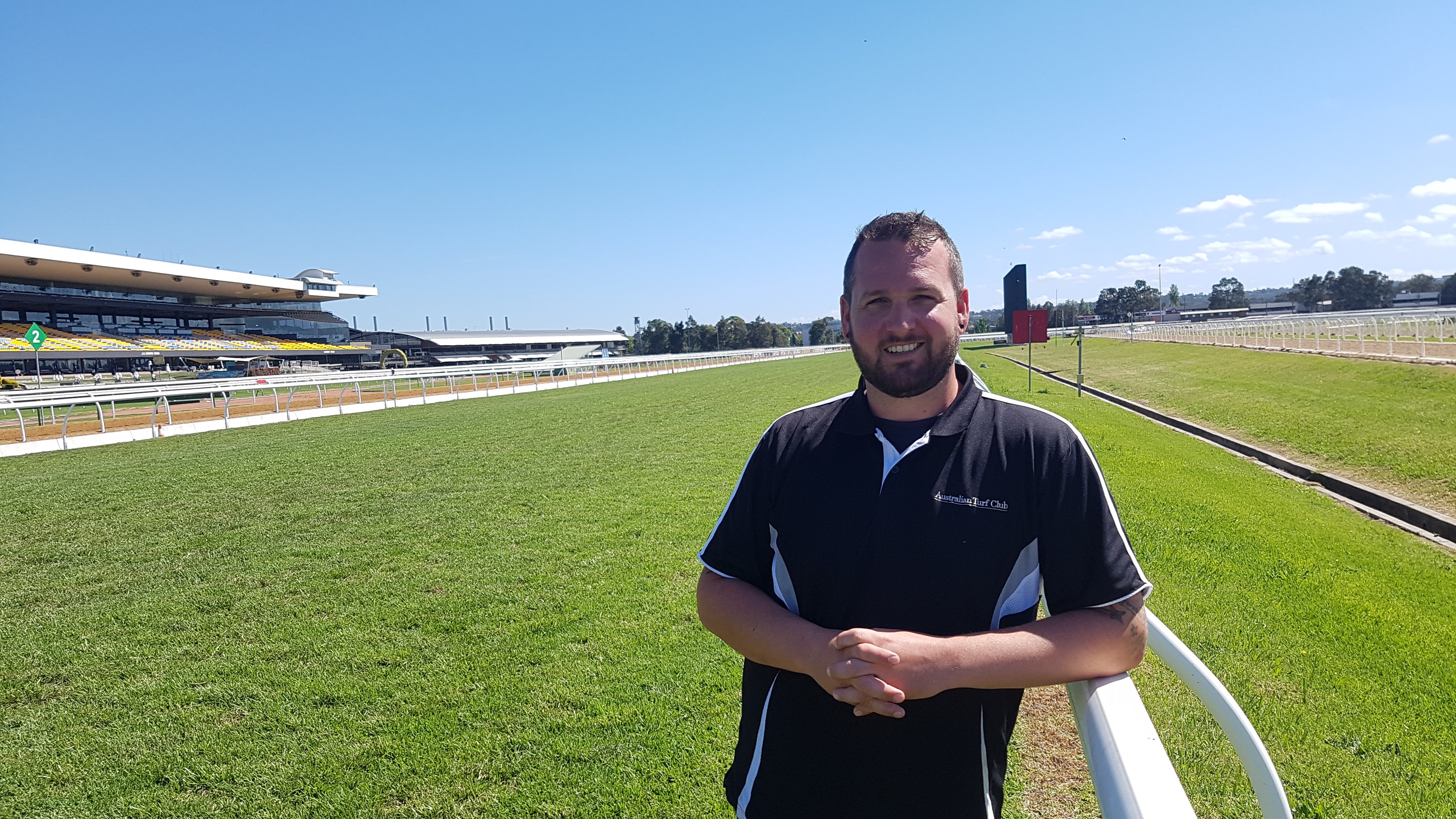 Shaun is looking pleased with his track 10 days out from the big race.

The young man feels his heart beating through his chest and his breathing is fast as he presses the security button to gain entry to Rosehill Racecourse.

“Hello” a voice from the box emits. “I am here to see Chris Toogood about a gardening job.” The young man says nervously and the gate slides open and he steps inside.

These are the first memories of a young man on the rise in the sportsturf industry. His name is Shaun Patterson. That apprentice gardening job turned out to actually be an apprentice greenkeeping job. He got the job and he is now the recipient of the 2019 Rising Star Award which is presented by the Australian Racing Managers Association.

The NSW STA has asked me to interview Shaun and try to get an insight into what makes a ‘The Rising Star’.

Looking back Shaun did not realize that as he took his first steps inside that racecourse his life changed forever. Only 12 years later he is now the track manager responsible for 20 track staff, 4 gardeners and office staff.

He now deals with the trainers of 400 horses and has regular meetings with some of racing’s royalty, with names like Waller, Waterhouse, Cummings and Freedman.

As I drive through the back of Rosehill Racecourse towards Shaun’s office, I am impressed with the standards of the gardens and topiaries etc. This tells me two things, firstly that someone here knows what they are doing and also that someone is managing them well in order to make sure that these standards stay in place.

As I pull up at the office I hear “Frank”, as I turn around, I see Shaun and also outside his office I recognize the outline of Andrew Webb. One of the turf industry really nice guys who is now second in charge at Rosehill Racecourse.

We exchange pleasantry and move inside. As we sit down, I have never met Shaun before so I can feel nervousness from both in the room.  So to break the ice, I asked him about growing up.

“I grew up in Bosley Park, attended school there and at school my favorite subjects were Agriculture and Biology. My dad is a TAFE teacher and trains in commercial cooking”. I can see he starts to relax a little.

My gut feeling kicks in and it tells me that I am talking to a genuinely nice young guy. I also notice that Shaun has signs of his generation. He has earrings and some tattoos. I believe this probably says more about me and the fact that I recognize these as being different rather than the 2019 norm. There is no doubt these are signs of the ‘Changing of the guard’ for turf managers.

I ask “Tell me about your journey Shaun, to get where you are today?”

“I started as an apprentice greenkeeper here in 2007. I attended TAFE at Richmond College for my Greenkeeping Trade Course. My teachers there were Ken Smith and Jay Wood.

I say “Shaun in 2011 you were awarded the STA NSW Graduate of the year. You then went to Adelaide and competed against the other state graduates. This was a great achievement. What did you think at that time?”.  Shaun pauses and then says “I felt very honored. I really did not know what to expect, it was a great opportunity to mix with other state graduates and attend the National Turf Conference in Adelaide. It gave me a belief that I could progress further in the industry”.

“Who did you admire coming up in the Turf Industry”? I ask. “I Learnt a lot from a group of guys including Chris Toogood, Lindsay Murphy and Daniel Beckhouse. They all helped me a lot.”

So, I thought I should contact a few of these guys to get the dirt on Shaun. Nobody can be this nice I thought.

When Daniel returns my call I ask, “Daniel you worked with Shaun for 3.5 years at Rosehill Racecourse. He is now in charge. Tell me about the real Shaun Patterson.?” “With Shaun, what you see is what you get. He was always ambitious, eager to please and keen to learn.” I say “Bloody hell mate. What about him blowing up at someone or a funny story!  “No mate the only thing I can tell you is that he has a really strong family bond. He loves his family. I remember being so impressed with a tattoo of his grandfather covering his back. Mate! It is a work of art. Really impressive”.

I ring Chris, “Chris you put Shaun on as an apprentice greenkeeper. He has done well.  However, tell me about the real Shaun Patterson” I ask. Chris replies, “What you see is what you get. He is always keen to learn, always calm and collected.”

“Jesus mate! There must be some dirt or funny story about Shaun” I ask. “Well mate, the only thing is this, that on a lot of race days he would turn up after being out fishing all night. But he never, ever bought me in any bloody fish. Not once!”. We both laugh.

The interview with Shaun took place only 10 days out from the feature race of the year. The $7.5 million Golden Eagle. When I ask Shaun about the race, he is really excited. He tells me about the other major races like the Golden Slipper and Golden Rose.

We walk out to look at the track and it is in very good condition. He is looking forward to the big race.

The Golden Eagle is a set weights race for 4 year old’s over 1500m. It is attracting the best Australasian and overseas horses.

I rang Shaun after the race and he was really happy. He said the International trainers were very complimentary with the track both the daqy before and on race day.

He said the day itself had a great feel about it. There were over 20,000 people in attendance and ATC were very happy with the event.

That young man with his heart beating in his chest has now risen up to prepare the stage for one of the richest turf events in the world.

He is an inspiration to all involved in the sporturf industry. However more importantly he is the pride of all those who have been part of his journey.

We wish Shaun all the best as he continues his career filled with great memories and great people.